The number of diagnosed cases of the coronavirus worldwide soared past the ten million mark last weekend as the number of new cases being found on a daily basis as hovered around 175,000 in recent days. 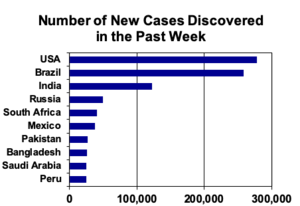 An increasing share of these new cases are being found in Central and South Asia, with rapid increases in India, Pakistan and Bangladesh. In each of these countries, the actual number of cases is likely many times higher as the level of testing is very low in those countries.

Latin America is also continued to be ravaged by the pandemic, with officials warning that the worst of the pandemic is yet to come for many countries in that region, including Brazil, which has the second-highest number of cases of any country in the world.

The number of coronavirus cases being found in the southern and western parts of the United States has also risen sharply in recent days, forcing a number of US states to reimpose lockdown measures. 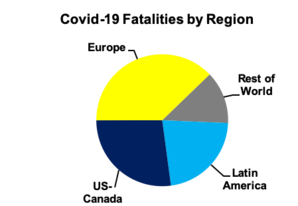 The number of fatalities linked to the coronavirus around the world rose to more than 500,000 last weekend.  38% of these fatalities have occurred in Europe, 27% in North America, 22% in Latin America and 13% in the rest of the world.

Another Forecast Downgrade: We, along with nearly all other major economic forecasting agencies, have once again downgraded our forecast for the global economy in 2020.  We now expect the global economy to shrink by 5.4%, with the biggest declines in Europe and Latin America.

Vietnam’s Bad Second Quarter: Vietnam was the first country to report its second quarter GDP numbers (even before the quarter is over!) and they showed that the Vietnamese economy expanded by just 0.4% on a year-on-year basis, its worst performance in more than 20 years.

The resurgence of the coronavirus in the United States has led to a sharp fall in the number of US voters approving of the way that President Donald Trump has handled this crisis.  He now trails Joe Biden by a big margin in the polls ahead in this year’s election.

While case numbers of Europe had been falling in recent months, a series of outbreaks in a number of European cities in recent days has raised fears that what is happening in the southern and western US could soon also happen across many areas of Europe.