With the global economy in the midst of its most severe downturn since the Second World War, the need to find generators of economic growth is more pressing than ever. While most countries will only release their GDP results for the second quarter of this year, a handful of East Asian economies have already done so. The first two, Vietnam and Singapore, showed contrasting results, with Vietnam able to generate a little economic growth (0.4% year-on-year) in the second quarter, but with Singapore's economy contracting by a shocking 12.6% on a year-on-year basis (41.2% on an annualized quarterly basis). With these results in mind, the world was anxiously awaiting today's GDP results for the second quarter from China, and they provided some reasons for hope, but also some causes for concern.

After shrinking by 6.8% on a year-on-year basis in the first quarter of this year as the coronavirus pandemic led to the imposition of one of the most severe lockdowns in the world this year, the Chinese economy bounced back more strongly than expected in the second quarter. 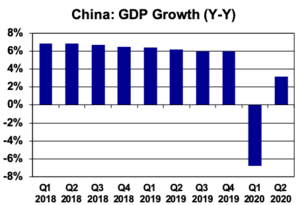 In the second quarter, the Chinese economy expanded by 3.2% on a year-on-year basis, a growth rate that was a full percentage point higher than what had been expected. Furthermore, this is certain to stand in stark contrast to the GDP figures for all other major economies in the second quarter.

China's manufacturing sector was the driver of most of this growth in the second quarter, as industrial production in China rose by 4.4% year-on-year during that period. The electronics and automotive sectors generated the highest growth in recent months. Retail sales remained weaker than expected in recent months. 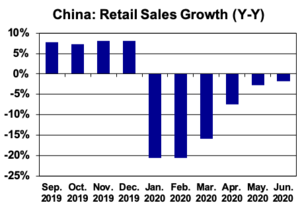 Having been expected to rise in June, Chinese retail sales instead fell by 1.8% year-on-year, their sixth consecutive monthly decline. In the first half of this year, retail sales in China declined by 11.4%. In many developed economies, it has been consumer spending that has prevented economic output from falling even further in recent months, but in China, it appears that it is the manufacturing sector that is playing this role as Chinese consumer spending remains well below expectations.

The Outlook for China and its Impact on the Global Economy

China's rate economic growth is forecast to continue to accelerate in the second half of this year, but this assumes that the country is not subject to an even larger outbreak of the coronavirus later this year. Because of this better-than expected result in the second quarter, we have revised our forecast for economic growth in China in 2020 upwards from 0.8% to 1.1%, while our forecast for Chinese GDP growth in 2021 remains unchanged at 7.7%.

This means that China is the only large economy in the world forecast to generate any growth over the course of this year, with each of the world's other ten-largest economies forecast to shrink by at least 4.6% this year. The bad news for exporters is that, while this recovery in China has been spurred by a rebound in many of the country's leading manufacturing sectors, consumer spending in China has remained subdued, a worrying development for exporters of consumer goods and services to China.

While this overall result is positive news for the global economy, the second quarter results that will be released by other major economies in the coming weeks are expected to show that these economies suffered their greatest contractions since the 1930s and the 1940s.  This will be led by the results from the United States and Europe that will be released at the end of this month, and should these numbers prove to be even worse than expected, the impact on business, consumer and investor confidence could be devastating.