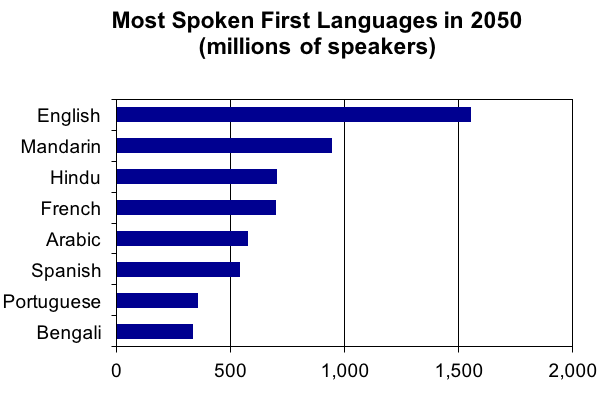 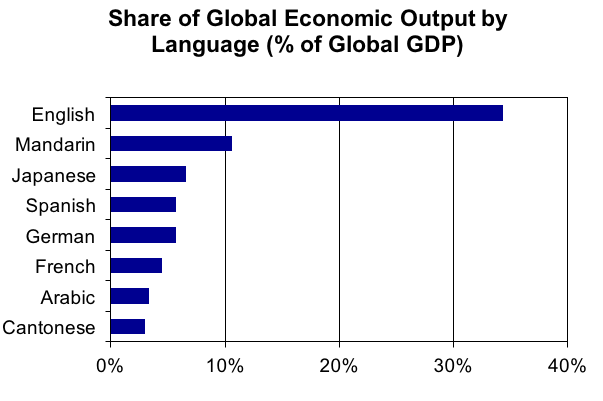 The Languages of the Future

Debating the importance of languages and the future rise and fall of individual languages can be a controversial topic.  This can be seen in the spirited debates over language that take place in countries that are divided by two or more languages, or within countries whose native language is losing ground to more influential foreign languages inside and outside of those countries’ borders.  In some cases, countries embrace the use of more powerful outside languages in the knowledge that this will boost their countries connectivity with the outside world and make it easier for that country to attract talent and investment.  In others, a country will take drastic steps to prevent the usage of foreign languages within its borders, while others will devote massive resources to promoting the learning and usage of their languages in other countries in a bid to prevent the long-term decline of their languages at home and abroad.

Many experts believe that technological advancements will remove the need to learn multiple languages as instantaneous translation services will become so advanced as to be able to allow the speakers of two different languages to communicate without any difficulty.  However, that day has yet to arrive and the use of a specific language in areas such as business, film, music and politics brings that language, and the countries that use that language, a great deal of power and influence that other countries with less influential languages cannot match.  For example, the fact that the English language was the dominant language at the time of the Information Revolution has been a massive boost for both the English language and the countries where English is the dominant language.  Meanwhile, the languages used for business in the world’s leading economic centers also enjoy significant advantages over languages that are spoken in less-developed and less-connected areas of the world.

When one looks at the current balance of power among the world’s languages, it is clear that the English language is in a dominant position, one that no language has ever been able to attain thus far.  This is due to a number of factors, including (1) that the world’s dominant power, the United States, is an English-speaking country, (2) that the British Empire was the largest empire of the 19th century, spreading the use of English to all corners of the map, (3) that English is the dominant language of global film, music and literature and (4) that many of the world’s fastest-growing economies use English extensively, including India.  English’s dominant position is evident in the number of people around the world who are currently learning English and are able to speak it to some degree.  In fact, English is now used in most parts of the world as the language of communication between peoples unable to speak one another’s language.

While English has emerged as the dominant global language in nearly all fields, other languages have either retained some of their power or influence, or are emerging as important languages in certain areas of the world.  For example, a number of languages now hold dominant positions in individual regions due to the fact that a majority of the countries in these regions use those particular languages.  For example, Spanish is the dominant language of Latin America, even as that region’s largest and most-powerful country has Portuguese as an official language.  Likewise, Arabic is quickly displacing colonial languages to re-emerge as the dominant language of much of the Middle East and North Africa.  Meanwhile, the rise of China as the world’s second superpower is adding to the power and prestige of Mandarin, the most widely spoken language in that country and the most spoken first language in the world.  In the meantime, while English is the most spoken language in Sub-Saharan Africa, other European languages such as French and Portuguese are also being given a boost by the fact that many countries in that region use those languages, and have some of the highest rates of population growth found anywhere in the world.

For the foreseeable future, it is hard to envision English losing its dominant status in the world.  With an estimated two billion people learning English today, its spread will continue and its role as the language of second communication in most areas of the world will only be enhanced.  In addition, the economic and cultural influence of “New World” countries such as the United States, Canada and Australia will continue to grow, further boosting the status of the English language.  Among the world’s other important languages, Mandarin is clearly in a position to emerge as the world’s number two language, thanks to the rise of Chinese economic, political and cultural power.  In fact, the number of people learning Mandarin is rising faster than any other language, particularly in countries where China’s economic presence is growing.  As emerging markets gain in influence, the languages spoken in these markets will also retain much of their importance, particularly in regions where English is not the dominant language of business or diplomacy.  Meanwhile, countries all around the world are certain to continue their efforts to both defend their leading languages at home, while promoting them outside of their borders, and the issue of language will remain highly contentious.