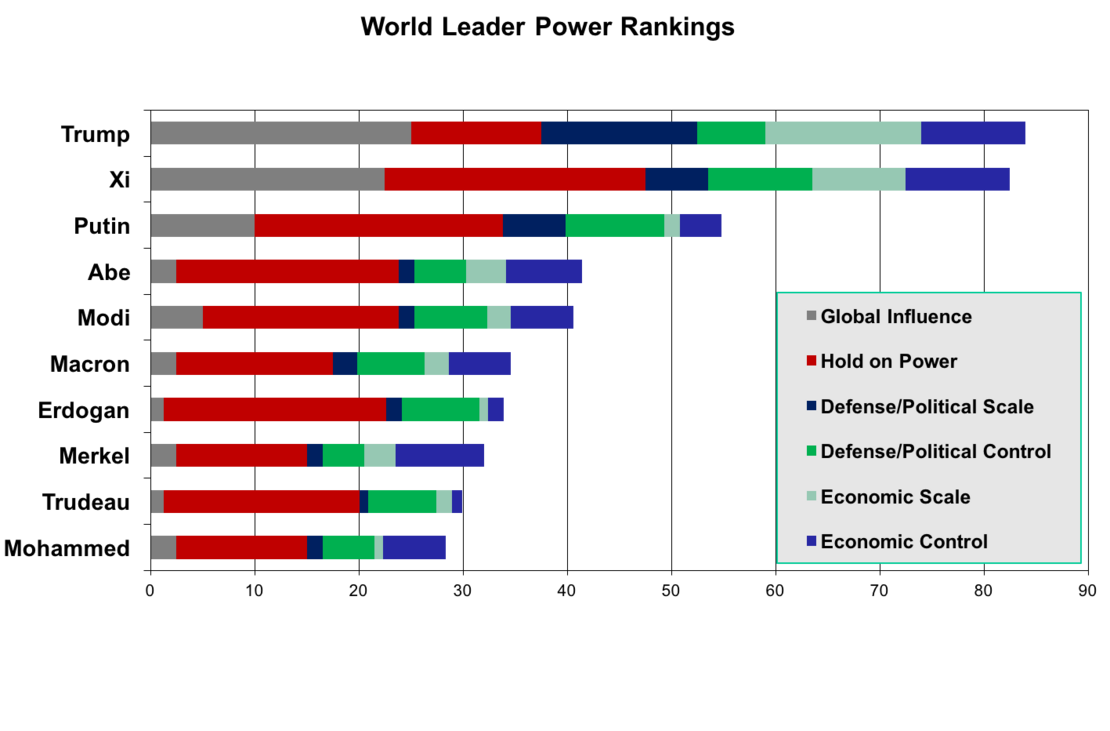 Who is the World’s Most Powerful Leader?

In recent months, there have been numerous debates over who currently is the world’s most powerful, or most influential, political leader.  In previous years, there was little debate over these titles as it was widely assumed that the president of the United States held all such titles as the head of the world’s most powerful country.  However, in recent years, there has been a growing sense of doubt as to whether or not the US president is in fact the world’s single most powerful political leader.  These doubts arose among some commentators during the Obama presidency and have increased steadily since Donald Trump became the US president last year.

Now, many commenters have begun referring to Chinese President Xi Jinping as the world’s most powerful, and most influential, political leader.  In some circles, doubts have been raised as to whether or not President Trump is even the most powerful political leader in the West, with some bestowing that title upon German Chancellor Angela Merkel (at least until her recent struggles to form a new government).  While these debates are an interesting exercise, they rarely are supported by hard facts.  As such, we decided to try and measure just who is the world’s most powerful political leader at the start of 2018.

To rank the various world leaders in terms of the power and influence that they exercise on the global stage, we established a series of criteria that we used to come up with a score for each of these leader’s level of power and influence, and weighted them accordingly.  These criteria are:

With these six factors, we developed a ranking of the world’s most powerful political leaders at the start of 2018 (see chart above).

In previous decades, the lead of the United States president over his international counterparts would have typically been much larger than that of President Trump over President Xi.  In fact, one can argue that, if President Trump’s grip on power is weakened by any of the scandals that he currently is facing, he could be overtaken by President Xi in the coming months, particularly as the Chinese president has recently strengthened his already considerable grip on power in China.  Only the US’ decisive military and wealth lead over China allows President Trump to maintain the title of the world’s most powerful political leader for the time being.

Meanwhile, the US and Chinese presidents’ lead over their counterparts in the rest of the world remains substantial and is likely to remain this large for the foreseeable future.  In fact, only future Indian leaders appear to have the potential to substantially close the gap with their future counterparts in the US and China, and India’s current political system makes it difficult for a prime minister in New Delhi to exercise as much power and influence as many other world leaders.  In the meantime, the leaders of smaller countries have the ability to exercise significant influence, if not power, in many areas.  For example, German Chancellor Angela Merkel retains significant influence over European economic policy, while Saudi Arabia’s Crown Prince Mohammed bin Salman has dramatically shaken up politics in the Middle East in recent years.  Altogether, the past few years have shown that political leaders still have the means to exercise great power and influence, even as global politics undergo significant changes that many thought would weaken the control exercised by governments and their leaders.