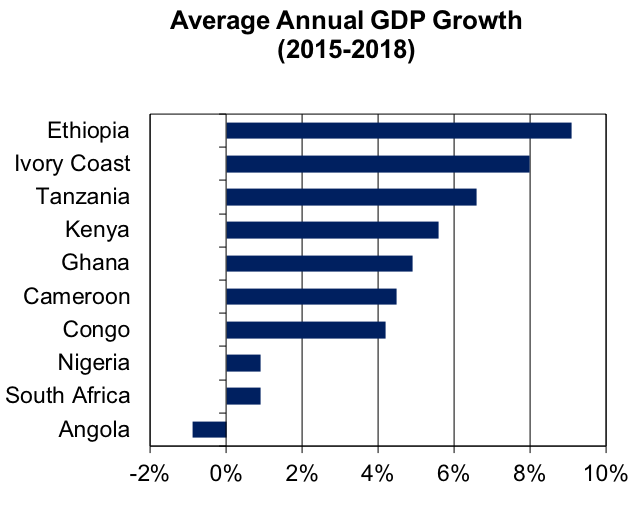 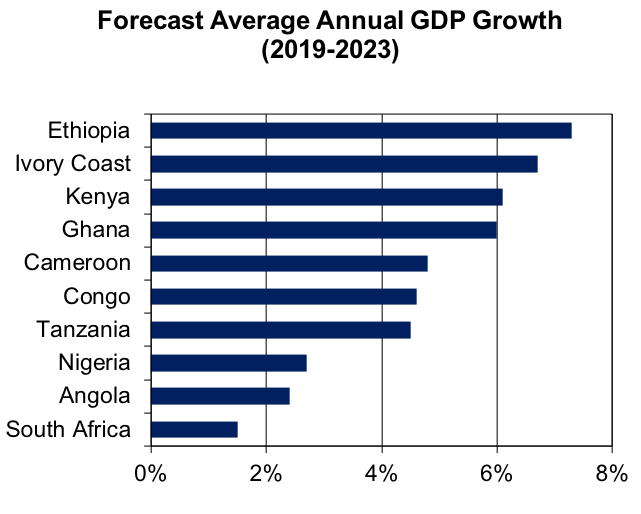 Not long ago, many economists, business leaders and investors were predicting that, by the time we approached the 2020s, Sub-Saharan Africa would be well on its way to becoming an economic powerhouse that was providing ample opportunities for growth for exporters and investors.  Supporting this hope was the fact that, just a few years ago, economic growth rates in Sub-Saharan Africa were higher than that of any region outside of Asia.  Furthermore, a fast-rising population meant that Sub-Saharan Africa has had the world’s fastest-growing working-age (and consuming-age) population, and this raised expectations that the region will be a major source of both consumers and workers.  This led to a sharp increase in foreign investment in Sub-Saharan Africa, particularly from major economies such as China, India and the United States, over the past 20 years.  With an expanding market and rising investment levels, businesses see the region as a potential long-term export market, as well as a future center of global manufacturing.  As such, many of the world’s hopes for long-term global economic growth have been pinned on this region.

Unfortunately, Sub-Saharan Africa’s recent economic performance has been anything but spectacular.  Between 2000 and 2014, the Sub-Saharan African economy expanded by 5.6% per year, a very respectable rate of growth and one that trailed only the world’s fastest-growing emerging markets. However, over the past four years, economic growth in the region has fallen precipitously.  Since 2015, Sub-Saharan Africa’s economy has expanded by just 2.6% per year, a rate of growth that is little more than the region’s rate of population growth.  Unlike Asian emerging markets, which have largely continued to grow at a strong pace in recent years, Sub-Saharan Africa’s economy has struggled in recent years, much like the economies of Latin America and the Middle East.  This has proven to be a bitter disappointment, both for the region and for the businesses and investors that have committed to the region and view the region as a key generator of their future growth.

Many of the region’s recent economic struggles can be traced back to the difficulties facing the region’s three largest economies.  South Africa, the region’s most developed and diverse economy, has recorded average yearly economic growth rates of just 1.5% over the past decade as labor militancy and corruption have sapped business and investor confidence there.  Nigeria, the region’s most-populous country, has seen its economy expand by less than 1% per year since 2015 as a result of lower oil prices.  Finally, Angola, a country that had one of the fastest-growing economies in the world during the first decade of this century, has seen its economy shrink by nearly 5% over the past three years.  In fact, almost all Sub-Saharan African economies that rely upon the exporting of a single commodity such as oil have been battered by the relative low price of most commodities in recent years.  Countries that suffer from a high degree of internal instability have also found it difficult to sustain economic growth, and too many countries in Sub-Saharan Africa are plagued by conflict or deep internal divisions.  Overall, a majority of the region’s largest potential economies have suffered from either low commodity prices or internal unrest and this has resulted in the region’s poor economic performance in recent years.

While too many Sub-Saharan African economies are struggling, there are some examples of economies in the region that have continued to record high levels of growth in recent years.  Many of these countries are found in East Africa, where a higher degree of economic integration and diversification has allowed that region to outperform other regions in Sub-Saharan Africa.  In fact, the economies of Ethiopia, Tanzania, Kenya and Uganda all managed to record growth of at least 6% in 2018, a better performance than almost any other region in the world last year.  In West Africa, there are also a handful of examples of countries that have avoided the slowdown experienced in other areas of the region.  For example, Ghana, Senegal and the Ivory Coast all recorded healthy rates of growth last year thanks to the diverse nature of their economies as well as inflows of investment into those countries.  Unfortunately, not enough countries in Sub-Saharan Africa have been able to emulate the success of these star performers in East and West Africa and these countries are not large enough by themselves to pull the rest of the region forward.

There are many reasons why Sub-Saharan Africa’s economy has failed to live up to the lofty expectations that were placed upon the region years ago.  Among the most notable are:

All of these factors listed above suggest that it will be very hard for Sub-Saharan Africa to rebound from its recent slump without some dramatic changes to the region’s, or the world’s, economy.  Therefore, the leading countries of this region need to focus on what is possible in order to improve the outlook for the region’s economy.  This includes a greater effort to integrate the various economies of the region, something that some of Sub-Saharan Africa’s largest economies seem reluctant to do.  Meanwhile, more investment in education and infrastructure would certainly provide long-term benefits for the region and enable integration to gain momentum.  Of course, none of this is possible without a higher degree of stability, and there are serious questions as to whether or not stability can be achieved in many areas of Sub-Saharan Africa.