Where is the Chinese Economy Headed? »
« The Global Balance of Power in 2039: A Look 20 Years into the Future 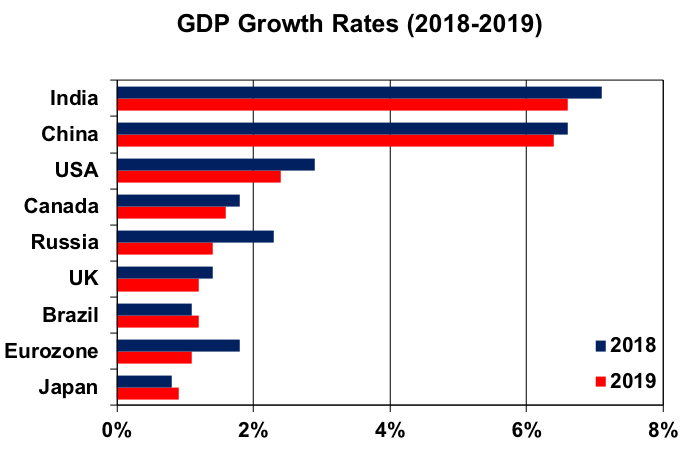 So far this year, the global economy has performed better than many economists had expected, with many of the world’s largest economies growing at a faster rate in the early part of this year than had been predicted.  In fact, many of the biggest fears for 2019 have thus far not come to pass.  For example, for all of the concerns surrounding a potential trade war between the world’s two largest economies, the US and China have thus far avoided a full-blown trade war.  Likewise, fears of a major market correction have also not been realized so far this year, with markets around the world remaining relatively strong.

Undoubtedly, there are many other risks faced by the global economy in the second half of this year, ranging from uncertainty over the direction on interest rates in major economies to the threat of a global currency war.  The point is that, the level of risk facing the global economy is on the rise, and this is quite worrying.  Despite all of the changes that have taken place in recent years, the global economy has remained, as a whole, remarkably steady, having recorded economic growth rates of between 3.3% and 3.8% each year between 2012 and 2018, a remarkably steady period of growth.  However, some of the risks facing the global economy today have the potential to severely reduce the overall rate of growth in the world, a dangerous development considering how little ammunition many leading economies have to combat a severe downturn.  As such, it is imperative that policymakers in the world’s leading economies do everything they can to mitigate these risks before they lead to a severe economic crisis.