Election Season Begins in the United States »
« Will the Middle East Explode in 2020?

How Healthy is the Chinese Economy?

One of the most pressing issues facing the world in 2020 is the health of the Chinese economy.  Not only is China the world’s second-largest economy, but it is now the largest source of growth for the global economy, accounting for one-third of all of the additional economic output that is forecast to be generated in 2020.  When the Chinese economy was generating growth rates in excess of 10% per year, its share of global economic output was far lower, and thus, its contribution to overall global economic growth was much smaller.  Today, the Chinese economy is still growing at three times the rate of the US, and as much as five times the rate of the European Union.  As a result, China is essentially adding an economy the size of Saudi Arabia each year to the global economy. 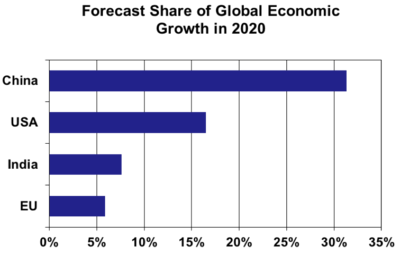 For exporters, China has become the world’s leading source of growth, as consumer and business demand levels have continued to expand in recent years, despite China’s economic troubles during this period.  Today, China ranks as the world’s largest export market, with a volume of goods and services imports nearly 7% larger than that of the United States.

Likewise, China has become an increasingly-important source of foreign investment, with dozens of economies around the world finding themselves more-and-more dependent upon investment from China.  Through its Belt and Road Initiative, China is financing and managing infrastructure development projects in more than 150 countries, many of whom have few other sources of foreign investment. 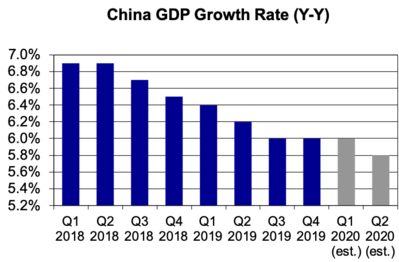 For the year in 2019, the Chinese economy expanded by 6.1%, the lowest rate of annual economic growth in China since 1990 and a far cry from the peak economic growth (14.2% in 2007) recorded in China prior to the global financial crisis.  In fact, last year’s rate of growth in China was well below the level of between 6.6% and 7.0% growth that was recorded each year between 2015 and 2018, highlighting how difficult 2019 was for the Chinese economy.

In the fourth quarter of last year, the key driver of growth in China was the economic stimulus measures that have been introduced by the Chinese government over the past two years.   In addition, consumer spending growth, while slowing, remained a major source of growth for the Chinese economy.  On the other hand, the trade war with the United States, coupled with increasing signs of weakness in many key export markets, combined to dramatically slow export growth in China last year, with exports rising by just 0.5 in during 2019.  Overall, 2019 was a year in which some of the vulnerabilities of the Chinese economy were exposed, but even then, China was still able to generate levels of growth that would be welcome in most other countries around the world.

A Downturn or a Collapse?

The gradual slowdown of the Chinese economy has long been foreseen, for as China’s income and wealth levels rose, it was inevitable that the double-digit growth rates of previous decades would be impossible to sustain.  In fact, between. 1980 and 2010, the Chinese economy expanded by a remarkable 10% per year, peaking at the aforementioned 14.2% in 2007.  Since then, growth rates have trended gradually downwards, with larger slowdowns taking place in 2015 (amid a high level of market turmoil in China, and last year (amid a trade war with the United States).

If one looks at other countries that have developed along the lines of China (such as Japan or South Korea), such trends are also visible.  In Japan, growth collapsed in the early 1990s, but at that point, Japan was a much wealthier country than China is today.  Meanwhile, economic growth in South Korea has slowed in recent years, but not before that country reached developed economy status.  For China, it is much poorer than Japan or South Korea after a similar lengthy period of high rates of economic growth, but it also faces similar threats from demographics, global rivals and more.  In fact, the slowdown that has been underway in China over the past decade is expected to continue, with economic growth rates approaching 4% or lower by the end of the 2020s.

Despite the ongoing slowdown, there are many things that are going right for the Chinese economy, and will continue to do so in the coming years.  For example, China’s transformation towards a consumer-driven economy will continue as, even with a slowdown in recent years, Chinese consumer spending growth continues to rise at a strong level.  In line with this is the fact that wealth continues to be generated in great amounts in China, and more of this wealth is finding its way of Chinese consumers.  Meanwhile, Chinese firms are playing an increasingly important role in many of the world’s fastest-growing high-tech sectors, challenging the leadership position of the United States and some of China’s neighbors in these industries.  Finally, given the massive size of the Chinese market, investment is likely to continue to pour into the country in large amounts, no matter how difficult relations between China and its key trading partners become in the years ahead.

While the overall outlook for the Chinese economy remains positive, there are a number of factors that have the potential to slow growth to a higher degree than expected in the coming years.  For example, while the US and China appear to have reached a truce in their bilateral trade war, this relationship could worsen again, especially once the presidential election in the US is over later this year.  Another factor threatening the Chinese economy is the proliferation of internal imbalances within the Chinese economy, most notably the soaring levels of debt (particularly on the private and banking sides) that have arisen in recent years.  Furthermore, the emerging coronavirus crisis could end up leading to much slower growth in China in the months ahead.  Finally, China faces a major demographic crisis, highlighted by the fact that China’s birth rate fell to a modern-era low last year.  In the years ahead, China’s working-age population is set to decline precipitously, posing a massive challenge to the long-term health of the Chinese economy.

Looking ahead, economic growth in China is forecast to trend downwards over the course of this decade.  The big question will be whether or not this decline is gradual, as has been the case in South Korea, or if China faces an impending collapse along the lines of that experienced by Japan in the 1990s.  In 2020, we expect the Chinese economy to expand by 5.8%, with growth then falling to 5.5% in 2021.  Even if the trade war with the United States is fully resolved, the likelihood that growth will accelerate again in China in highly unlikely.  In fact, we now forecast growth to fall below 5% no later than 2025, with the downside risks facing the Chinese economy continuing to grow.

Still, much could change.  Should China find itself in a trade war with not only the United States, but other major trading partners, growth will slow significantly.  Likewise, should China experience a severe debt crisis in the coming years, the impact on the Chinese economy will be massive.  Despite these fears, for better or worse, China is the economy that will have the greatest impact on the health of the global economy in the 2020s, so it is imperative that governments, businesses and investors monitor closely the economic developments that are to come in China, for they will have an impact on all corners of the world.