The Lessons Learned from the Past Decade »
« How Healthy is the Chinese Economy?

Election season in the United States never really ends, for as soon as one election cycle ends, another begins seemingly immediately.  That said, this week’s shambolic Iowa caucus signaled the real beginning of the 2020 presidential election season in the United States. Over the course of the month of February, the Democratic Party will hold another caucus in Nevada, while primaries will be held in New Hampshire and South Carolina.

In early March, the race for the Democratic party’s nomination to challenge President Donald Trump will likely be decided, as March 3rd’s “Super Tuesday” primaries will take place in 14 states, including crucial states such as California and Texas.  One week later, six more states will hold primaries and by then, the Democratic field will likely have been whittled down to just one or two leading candidates.  While it is uncertain who will be the Democratic Party’s eventual candidate, what is certain is that the 2020 presidential election campaign in the United States will be one of the most watched elections in world history. 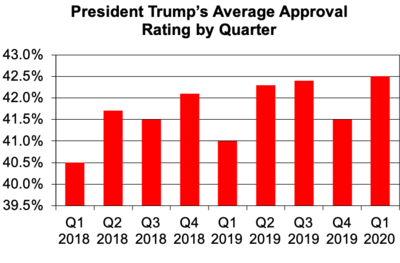 Nevertheless, his support level among his core supporters remains extremely strong, and he has seen an upturn in his approval rating in recent weeks, aided in part by the Democratic Party’s recent missteps.  Still, it appears likely that President Trump will struggle to win the popular vote in November, as he lost the popular vote to Hillary Clinton by a margin of 48.2% to 46.1% in 2016.

For the Democrats, the field of candidates competing to win the party’s nomination and square off against President Trump in November remains highly divided, despite the fact that the field has shrunken in recent months.  Nationally, former Vice President Joe Biden remains the front-runner, but he has not been able to pull away from his rivals, and his awful performance in the Iowa caucus could raise more questions about his viability as a candidate. 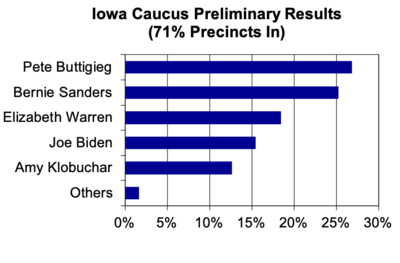 In contrast, Bernie Sanders has made major gains in recent weeks, and is now the clear leader on the party’s left-wing, having taken support away from his main rival on the party’s left, Elizabeth Warren.  Meanwhile, former New York City Mayor Michael Bloomberg has thrown vast amounts of money into the campaign, and he is now finally beginning to see gains in his support nationally.  In Iowa, former South Bend Mayor Pete Buttigieg performed much better than expected, and this could bolster his poor numbers of states that will vote in the weeks and months ahead, giving him an opportunity to claim the center ground among the Democrats’ crowded field of candidates.

In New Hampshire, whose primary takes place next week, Sanders continues to hold a small lead over Biden, and his strong performance in Iowa could boost his levels of support in that state.  However, in the next two states to vote, Nevada and South Carolina, Biden remains out front, although it remains to be seen what impact his poor performance in Iowa will have on his standing in those states.  What is certain is that the race for the Democratic nomination is likely to be a very close-run affair and one that could divide the party as it prepares to attempt to unseat President Trump.

In 2016’s presidential election, nine states were decided by a margin of less than two percent, with President Trump winning seven of these states.  This suggests that the president will have a difficult time holding on to all of those states, even as he now enjoys the power of the incumbency (incumbent presidents have won eight of the ten elections that they have contested since the Second World War).  To win re-election, President Trump will have to once again win a majority of the swing states that are up for grabs, as he is unlikely to make any breakthroughs in the increasingly-Democratic Northeast and Pacific Coast regions.

Of these swing states, five northern states (Pennsylvania, Ohio, Michigan, Wisconsin and Iowa) will once again be pivotal, as he won each of these in 2016, but is struggling in the polls in most of these states this time around.  Meanwhile, a handful of southern states will be tightly contested this year, including Florida, North Carolina and Georgia, three states that the president carried in 2016.  Finally, President Trump will hope to perform better in the western US as he seeks to overturn his defeat in Nevada, while holding on to the increasingly competitive state of Arizona.

Many Factors Will Decide the Election

A number of factors will determine this race, some of which are already known and some of which may yet emerge in the months ahead.  Most importantly, the Democratic party’s nomination process could prove highly divisive and could yield either a deeply divided party or a candidate that will struggle to defeat President Trump in November.  Meanwhile, the economy, as always, will be a key factor in this election, as while the US economy has performed well in recent years, it is facing increasing headwinds in 2020. 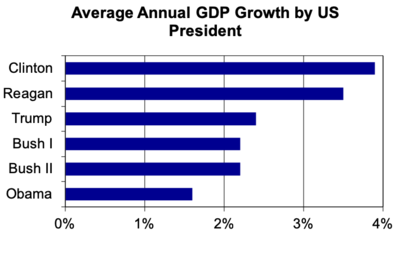 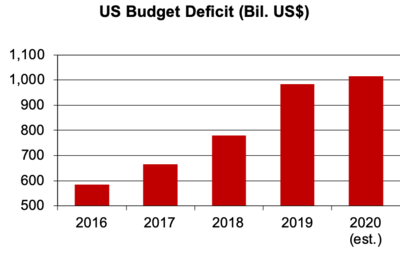 The impeachment process could also play a role in this election, as President Trump’s heads for acquittal in what was yet another highly-partisan dispute.  The issue of immigration could also be a major factor this year, just as it was in 2016 when the president used concerns over immigration to put the Hillary Clinton campaign on the back foot in many states.  Health issues could also be important, as President Trump will be 74 years old in November, while most of the Democratic Party’s leading candidates are also over the age of 70.  Finally, voter turnout will be crucial in swing states, with Hillary Clinton’s defeat in 2016 being attributed, in part, to her inability to energize her base in a number of states that she lost by a small margin.

Making a prediction on the outcome of the 2020 presidential election remains a challenge, as a number of variables could yet shake the election.  For President Trump, the factor that lends the most support to his confidence in winning a second term in office has to be the simple power of the incumbency, with it having been proven many times over that incumbent presidents are hard to unseat in the United States.  Furthermore, his base remains behind him and is likely to turn out in large numbers in November.  On the other hand, President Trump’s approval rating is lower at this stage of his presidency than that of any of president since the 1940s, suggesting that he is ripe for defeat.

For the Democrats, their focus should be on finding a candidate that can win some of the swing states that President Trump won in 2016, but this could be jeopardized by the party’s deep divisions (and its chaotic caucus in Iowa) so far during this campaign.  While much remains uncertain, it does appear that, at least in the Electoral College, this will be a closely-fought election, with 10-to-12 swing states once again likely to determine the outcome of the election.