The Economic Lessons of the Spanish Flu Pandemic

Once overlooked, the misnamed Spanish Flu pandemic that lasted from 1918 until 1920 is back in the headlines as the world faces the Covid-19 pandemic, the greatest global health crisis since the Spanish Flu. While other monumental events from the first half of the 20th century such as World War One, the Great Depression and World War Two have remained firmly in the public’s imagination, the Spanish Flu had been largely forgotten by most people apart from historians and epidemiologists. That being said, the Spanish Flu’s impact should not be overlooked, as its impact on global health is sure to be many times greater than the current pandemic that has shut down much of the world in recent months.

The Impact on Global Health

First, let’s start by looking at the health impact of the Spanish Flu. As we do, it becomes quickly apparent that the scale of this pandemic was unlike anything we have seen since, including the current Covid-19 pandemic. One reason for this was the fact that, unlike Covid-19, the Spanish Flu was most likely to kill younger people with dozens of years of their productive lives ahead of them. Another was the fact that, unlike today, the means of slowing the spread of the virus were not as well known, or enforced, allowing for the virus to hit many parts of the world virtually without warning.

The overall numbers are truly staggering. It is estimated that as many as 500 million people, or 26% of the world’s population at that time, contracted the Spanish Flu. Furthermore, it is estimated that 50 million people died during this pandemic, with some estimates suggesting that the actual number of global fatalities was closer to 100 million. No matter what happens in the coming months with the Covid-19 pandemic, no one is predicting these levels of fatalities, even as the population of the world is four times higher today than it was during the Spanish Flu pandemic. 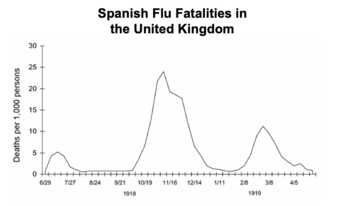 In the United States, the death toll from the Spanish Flu was between 500,000 and 850,000 (or 0.48% to 0.81% of the US’ population at that time). The situation was worse in war-torn Europe, where it has been estimated that 2.6 million people died as a result of the flu, or 1.1% of Europe’s population after World War One. The largest number of deaths are believed to have occurred in India, where anywhere from 12 to 17 million people are thought to have died from the Spanish Flu. Overall, this made the Spanish Flu pandemic the deadliest pandemic since the “Black Death” that raged from 1347 to 1351.

The Immediate Impact on the Global Economy

While it is the impact on global health that comprises most of our understanding of the Spanish Flu pandemic, its impact on the global economy and the catastrophes that were to befall the world over the next 25 years should not be overlooked. Of course, measuring the economic impact of the Spanish Flu is difficult as it did not happen in isolation. Instead, it began during the final months of the First World War, which, together with the massive disruptions and dislocations associated with the immediate post-war period, meant that the pandemic took place during what would have anyways been a period of extreme economic volatility.

For Europe, which remained the center of the global economy during this era, the economic impact of the Great War was immense, with many of Europe’s leading economies left destitute by the great expenditures during the war. In fact, while World War One would not cause the destruction of much of the productive capacity of European countries as the Second World War would do just a generation later, it left even Europe’s most powerful economies in dire straits, particularly as most of them found themselves owing massive debts to the world’s new leading economic power, the United States. The war accelerated what was an already momentous shift in economic power from Europe to North America and began what has been for the past century a decline in Europe’s relative worldwide economic power that has not abated to this day.

While economic power was shifting westwards across the North Atlantic, the Spanish Flu was having a near equal impact on the economies of both sides of the Atlantic. In the United States, after the economy expanded by 9.0% in 1918, it stagnated over the next two years, growing by 0.9% in 1919 and contracting by 0.1% in 1920. Whole other factors also contributed to this two-year slowdown, the Spanish Flu and the lockdown measures that were imposed on parts of the United States also played a role. 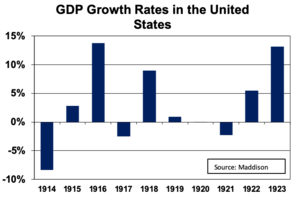 In the United Kingdom, the world’s second-largest economy during this period and a country that suffered very little material damage in World War One, the economy grew by just 0.6% in 1918, before shrinking by a whopping 10.9% in 1919 and another 6.0% in 1920. Again, much of this economic crisis was the result to the impact of the war ending and the British economy having to return to a peacetime footing. However, the impact of the Spanish Flu almost certainly contributed to these economic troubles. 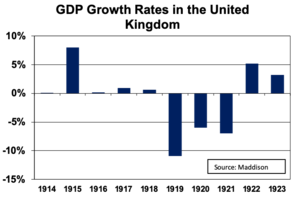 While the global economy suffered significant losses during the actual time of the pandemic, these troubles eventually gave way and a period known as the “Roaring 20s” emerged, a period in which the global economy experienced its highest rates of economic growth in decades. While some countries did experience some dramatic economic upheavals (such as Germany’s hyperinflation of 1922-23), overall, the world’s leading economies enjoyed rapid growth. The economies of Germany, France and Canada all expanded by a little more than 50% during the 1920s, while the US economy expanded by more than 40%. Only the United Kingdom struggled to generate strong growth in the 1920s, as its economy expanded by a little more than 30%. In fact, much of the mid-to-late 1920s were considered a boom time for much of the global economy, leading often to irrational exuberance that would come back to haunt the economy at the end of that decade.

As we know now, the hopeful days of the 1920s gave way to a decade that is now synonymous with economic turmoil, the 1930s. The Great Depression that began with the stock market crash in New York City in October 1929 would result in dramatic declines in economic output around the world. While some countries would enter a period of recovery in the mid-1930s, few economies were able to fully rebound from the Great Depression, and it is often forgotten that the United States and many other leading economies entered into another steep economic decline in the late 1930s, only for World War Two to intervene. Some economies (the United States, France and Canada, to name a few) actually recorded smaller levels of economic output in 1938 than they did in 1929, while among larger economies, only Germany recorded output in 1938 that was substantially larger than it was in 1929 (thanks to Germany’s unsustainable rearmament program). 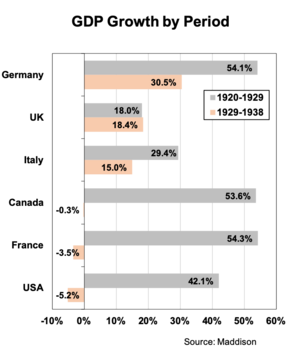 What are the Lessons from the Spanish Flu

Given the complexity of the geopolitical situation in the world during and after the Spanish Flu pandemic, it is clear to see that it is very difficult to accurately measure this crisis’ impact on the global economy. However, as we know that the Spanish Flu was particularly deadly for younger people, we can confidently assume that it had a negative impact on the demographic situations in countries all around the world, reducing the potential number of workers and consumers at a time when their productivity and wealth was most needed. Likewise, as poorer areas such as India and China were hit particularly hard by this pandemic, we can also assume that this stifled their economic development, delaying their return to the top echelons of the global economic output tables until the early 21st century.

As we look at the situation unfolding today amid the disruptions to the global economy caused by the Covid-19 pandemic, we can see some similarities. While Covid-19 generally affects older and sicker people, its economic impact is likely to be mostly felt by younger generations in which the job losses are the greatest and which will be left the burden of paying for the massive debts that are being incurred during this crisis. This weakening of the younger generations could have major economic ramifications down the road, just as the massive deaths among younger generations in World War One and the Spanish Flu pandemic did in the decades that followed. Perhaps we will see an initial phase of exuberance in the years after the Covid-19 pandemic, just as we did in the years that followed the Spanish Flu pandemic. However, both pandemics left economies on fragile legs and if we don’t heed the lessons of the 1920s and 1930s, we could be doomed to suffer the same economic fate as the world of that era.