ISA Coronavirus Update (19th of May) 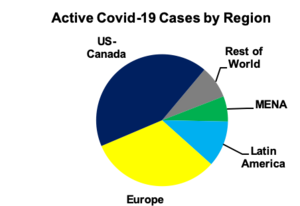 Nearly 43% of the active cases of the coronavirus around the world are know found in the United States and Canada, while Europe’s share has fallen to 32%.  However, Europe still accounts for more than half of the fatalities attributed to this pandemic. 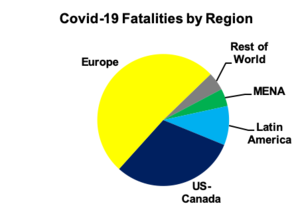 The number of cases of the coronavirus in Russia continued to rise by one of the fastest rates of any country in the world, with the total number of cases in that country rising to 300,000.  Outside of Moscow, one of the hardest hit regions has been Dagestan, as that region’s under-developed healthcare system has found itself unable to cope with the fast-rising number of coronavirus cases there.

Qatar and Kuwait introduced strict new requirements for wearing masks in public.  In Qatar, anyone found outside without a mask now faces a prison sentence of up to three years.

Hope for a Vaccine: The US-based biotech firm Moderna reported that their first small-scale test of a vaccine for Covid-19 produced protective antibodies in a number of healthy test subjects.  This potential vaccine will now be tested on a much larger number of individuals.

Trump Goes After the WHO: United States President Donald Trump informed the World Health Organization (WHO) that the US could permanently withdraw its funding for that organization.  Earlier, President Trump accused the WHO of being “a puppet of China”.

Spain’s government announced plans to introduce a monthly basic income program to cover at least 100,000 of that country’s poorest households during the Covid-19 crisis.  Such programs are also being considered in a number of other hard-hit countries.

The chairman of the United States Federal Reserve, Jerome Power, warned that the US economy could shrink by as much as 30% on an annualized basis in the second quarter of 2020, while the US’ unemployment rate could rise to between 20% and 25%.