ISA Coronavirus Update (22nd of May)

The acceleration in the number of new diagnosed cases of the coronavirus (Covid-19) continued in recent days, bringing the number of worldwide cases to more than 5.2 million.  This brought an end to weeks where the daily average of new cases diagnosed was around 80,000.

In contrast, the increase in the number of new deaths caused by the coronavirus began to slow slightly in recent days.  The total number of fatalities from the coronavirus now stands at 335,000.  83% of these official fatalities are in Europe and North America, although the totals for other regions are believed to be greatly under-reported. 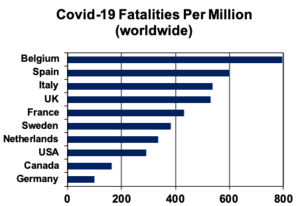 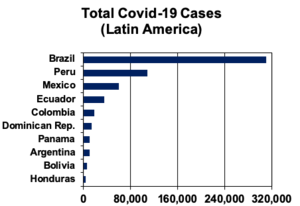 The United States continues to have the most cases of the coronavirus (1.6 million), and while the increase in the number of cases in the hard-hit northeastern part of the US has slowed, other areas have seen significant increases in their number of cases, particularly the southern US.

European Recovery Fund: The leaders of Germany and France reached a deal on a €500 billion ($545 billion) economic recovery fund for the European Union.  This was viewed as a major concession by Germany, as it had been reluctant help fund poorer EU member states.

The difficulties that India and Bangladesh had in dealing with Cyclone Amphan this week highlight the challenges that the coronavirus lockdowns will bring to many areas of the world as their hurricane and cyclone seasons approach.

China is using the cover of the coronavirus pandemic to attempt to impose a controversial new national security law in Hong Kong.  This is raising fears that a new round of pro-democracy protests could erupt in that territory, despite the pandemic.