As the number of new cases of the coronavirus being discovered worldwide continued to rise at an accelerating pace, the total number of global cases surpassed nine million last weekend.  Meanwhile, the number of fatalities linked to this pandemic surpassed 470,000. 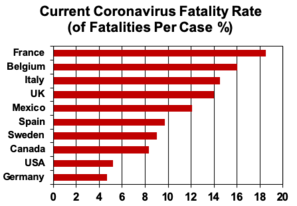 The number of cases of the coronavirus in Brazil passed the one million mark and now stands at 1,087,000, or 12% of the total cases worldwide. Meanwhile, the number of fatalities blamed on the coronavirus in Brazil passed 50,000 last week and now stands at 50,659.  Health experts warned that Brazil was still weeks away from reaching the peak of the first wave of the pandemic.

A number of other countries in South America have recorded a similar number of cases on a per capita basis as Brazil, including Peru (255,000 cases), Chile (242,000) and Ecuador (51,000).  Meanwhile, two countries that had largely avoided the huge numbers of cases found elsewhere in the region, Colombia (69,000 cases) and Argentina (43,000), have seen their number of new cases being diagnosed rise sharply in recent weeks.

The United Nations warned that the coronavirus was spreading across war-torn Yemen at a much-faster rate than had been expected, although the lack of testing has prevented the scale of the outbreak in that country from being accurately measured.

No Agreement on a European Rescue Package: During a recent virtual summit, European Union member states were unable to reach an agreement on a proposed €750 billion ($840 billion) rescue package for those member states whose economies have been hit the hardest by the coronavirus pandemic.

Fears of a Second Wave: After business and investor confidence levels appeared to be rising earlier this month, there has been a noticeable downturn in this confidence in recent days as fears of a second wave of the coronavirus pandemic have increased substantially.

Testing levels remain well below targets in nearly all parts of the world. So far, no major country has tested more than 12% of their population for the coronavirus. In order for more segments of the economy to open, testing levels will have to rise dramatically. 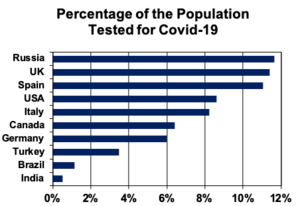 With lockdown and social distancing measures having been in place in many parts of the world for more than three months, public anger continues to rise, as evidenced by the large number of protests and riots that have erupted around the world this month.