The number of coronavirus cases worldwide approached 16.5 million, while the number of global fatalities rose to more than 650,000.  There have been around 250,000 new cases being diagnosed on a daily basis over the past week, the highest number of new cases so far during the pandemic. 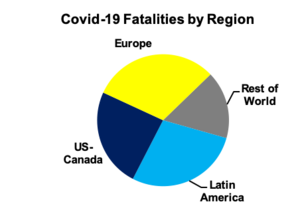 Nearly 30% of these newly-diagnosed cases of the coronavirus have been found in the United States, with southern and western states such as Florida, California, Texas and Georgia leading the way.

The number of new coronavirus cases in Brazil continued to climb relentlessly, with an average of 45,000 new cases being diagnosed in that country on a daily basis over the past week.  Increasingly, new cases are being discovered in smaller towns and more remote areas of that country, with remote indigenous groups also being impacted.

There was a surge in the number of new cases of the coronavirus being found in the northeastern Spanish region of Catalonia, raising the possibility that Spain was entering a second wave of the pandemic.

New Cases in East Asia: In recent days, North Korea has admitted to diagnosing its first case of the coronavirus within its borders, while Vietnam, which had recorded no new cases over the previous 100 days, recorded a number of new coronavirus cases this week.

South Korea Falls into a Recession: Despite its deft handling of the coronavirus pandemic so far, South Korea’s economy is not immune to the impact of the pandemic as it fell into a recession when the country’s economy shrank by 2.9% on a year-on-year basis in the second quarter of this year.

Later this week, many of the world’s largest economies (including the United States, European Union and Mexico), will released their GDP results for the second quarter. Worse than expected results could rattle the markets, as well as business confidence.