Devastation for the Global Economy

The economic results for the second quarter were expected to be dreadful, and the initial results that were released for that period this week were generally as bad as had been expected.

The United States economy contracted by 9.5% on a year-on-year basis (32.9% on an annualized basis) in the second quarter of this year, its worst performance since the Great Depression.  Consumer spending, especially on services, fell dramatically as lockdown measures and a sharp rise in unemployment led consumers to make major cutbacks in spending. 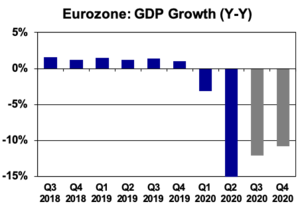 The Mexican economy was also battered, as it shrank by a record 18.9% on a year-on-year basis in the second quarter of this year. Not only did consumer spending fall sharply in the second quarter, but so too did most industrial sectors in Mexico, most notably its automotive industry.

Of the countries that have reported their second quarter GDP data so far, only China has managed to record any growth, and this followed a sharp contraction for the Chinese economy in the first quarter of 2020.

The Outlook for the Remainder of 2020

The US and most European economies are forecast to bounce back with strong growth in the third quarter. However, the continued spread of the coronavirus in the EU, and its growing resurgence in Europe, are threatening to derail these recoveries. 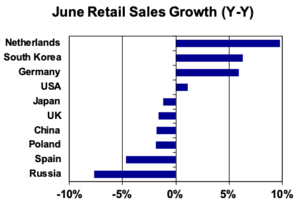 Some major developed economies (Canada, Australia and the United Kingdom) still have to release their second quarter GDP results. However, the focus will be on emerging markets such as India, Brazil and Russia, countries hit hard by the pandemic.