Are the United States and the European Union Destined to Break Up?

It is commonly assumed that the two main entities that comprise the collective “West”, the United States and the European Union, are in the midst of one of the roughest patches ever when it comes to their bilateral relationship. However, there are many reasons to believe that not only has this deterioration in their relationship been taking place for a much longer period of time, but that this deterioration will continue for years, if not decades, to come, leading to what could one day be a complete “break-up” of the US and the EU.

There are many reasons for this drifting apart of the US and the EU. On one hand, the United States, for much of its history, has been a country with a very strong isolationist streak and this characteristic of the US has come back in a strong way in the 21st century. Europe, on the other hand, remains, for the most part, a region that maintains extensive ties with other parts of the world. Another important factor in the shifting relationship between the United States and the European Union is the fact that the EU has largely surrendered its strategic autonomy in many important areas to the US, but an increasingly inward-looking United States has led to calls from many EU leaders for Europe to regain some of this lost autonomy.

In the late 1980s and early 1990s, the fall of Communism in Europe and the collapse of the Soviet Union left the United States alone as the world’s sole superpower (at least until China’s rise elevated that country to superpower status in recent years). However, this also led to renewed strategic ambitions for some European countries, if not for the EU as a whole. At the same time, domestic politics in the US resulted in the world’s strongest power turning inwards, while political and economic crises forced the European Union to also focus more of its efforts on internal issues for a time. As such, the two sides that were once so closely intertwined now appeared headed for an inevitable break-up.

Together, the combined West was perhaps the most powerful political, military and economic force the world has ever known. Initially, the West was led by Europe’s leading powers, particularly the United Kingdom and France, as the US, while a rising economic superpower, did not become a military and political superpower until the two World Wars. However, by the end of the Second World War, the balance of power within the Western bloc had shifted dramatically in favor of the United States, giving the US a dominant position among that group of countries. Even after European countries rebuilt their economies and regained some of their military power following the Second World War, their overall level of power was dwarfed by that of the US. This led to European powers, led by a still ambitious France, to attempt to pool their resources to counter US dominance and regain some of their lost strategic autonomy. Thus, the European Union was born.

As long the Soviet Union was a serious military threat to Europe, the unequal relationship between the United States and the European Union was tolerated on both sides. However, over the past three decades, splits between the two sides (and within individual countries on both sides) have been emerging. Under President Barack Obama, the United States turned its attention increasingly away from Europe and towards Asia, where China was emerging as the single greatest threat to US global leadership since the Second World War. At the same time, a number of European leaders were calling for Europe to regain its strategic autonomy and to lessen its dependence upon the protection of the United States. In recent years, the decision by British voters to withdraw from the European Union, the protectionist and isolationist policies of the Trump Administration in the US, and the increase in support for more radical political parties in Europe have all served to further divide the two main components of the West.

From Allies to Rivals?

For students of history, this growing split between the United States and the European Union should have been foreseen, as while the two sides have much in common, they are also bitter rivals in many fields. Economically, the United States’ high-tech, free-market economy stands in contrast with the EU’s economy that is based on many more traditional industries and includes strong social protection measures. The US’ increasing dominance of many high-tech industries is also viewed with concern in the EU, which has countered by attempting to take over the legislation of many of these industries, despite Europe’s relatively small presence in most of these industries. Ideologically, divisions between the United States and the European Union have also widened, particularly when there are Republican-led governments in Washington. Finally, while the military balance of power between the United States and the European Union is heavily skewed in favor of the US, it is easy to see how the US and some European countries could become rivals in various flashpoints in Europe or around its periphery. 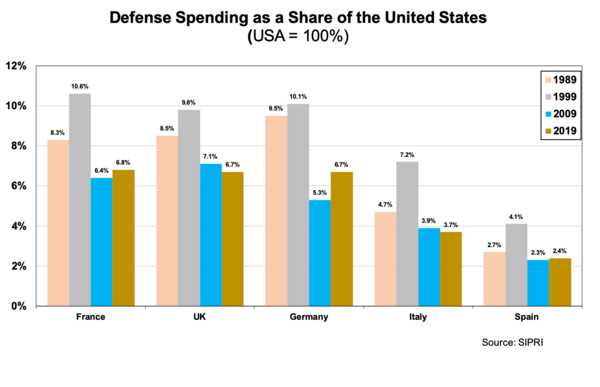 For most European countries, a break-up with the United States will not be easy. While the European Union likes to take credit for the prolonged post-war peace in Europe, most European leaders know deep down that it was the US’ post-war military presence in Europe that played a massive role in maintaining regional stability and security. With external threats to the EU mounting in the form of growing Russian assertiveness, a rising China and an unstable Middle East and Africa, Europe faces many serious challenges to its security in the 2020s.

At the same time, most European economies are dependent upon exporting outside of Europe for much of their growth, and it is the dominant position of the US Navy in international sea lanes that keep this trade flowing. With all of Europe’s recent economic troubles, a break up with the United States could result in many unforeseen economic problems for Europe’s export-dependent economies. Still, despite all of these factors, the level of unease in Europe about the region’s relationship with the US is likely to remain high. 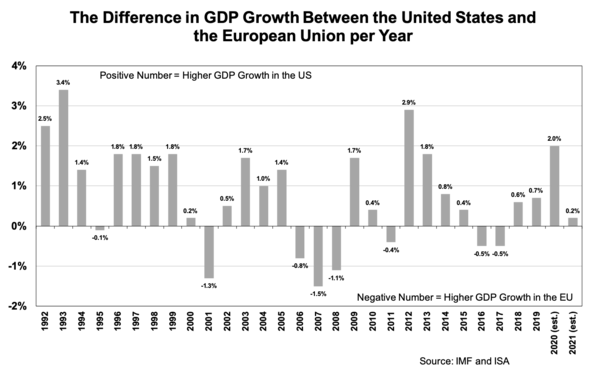 As for the United States, recent years have shown that the isolationist streak that so long dominated US foreign affairs is still in place, even after the US assumed a dominant and extensive role in international affairs since the 1940s. As such, its willingness to defend Europe and engage itself in foreign conflicts was always going to be unpopular with a large segment of the US population. At the same time, Europe’s calls for more strategic autonomy and its attacks on US-based high-tech firms has led an increasing number of people in the US viewing the European Union more as a competitor and less as an ally.

Sure, the US military views its bases in Europe as valuable assets in projecting US power abroad, but few military or political leaders view the EU as a whole as a trusted ally of the United States. Instead, the US has maintained close relations with a handful of individual European countries (such as the United Kingdom or Poland), but relations with the European Union itself have become more distant. Nevertheless, should the United States’ rivalry with China and Russia intensify in the coming years, it is likely that make policy makers in the US will come to view the EU as a potential ally in these great power rivalries.

During the presidency of George W. Bush, it was assumed by many that US-EU relations could not deteriorate much further. However, the Trump presidency has led to an all-new low in Trans-Atlantic relations, and it is possible that this vital relationship could yet deteriorate much more in the years ahead. While this would cause all sorts of problems for the West, it would benefit many other powers that hope to improve their own standing in a world that has been shaped by the leadership of the West.

It remains to be seen if the damaged relationship between the United States and the European Union can be repaired. Should President Trump lose his bid for re-election later this year, near-term relations are likely to improve. At the same time, the currently-difficult relationship between the United Kingdom (the US’ leading ally in Europe) and the European Union could recover in the coming years, allowing London to resume its role as the glue that holds the US and Europe together. Likewise, external threats from Russia, China or the Middle East could bring the two sides closer together, as they have done in the past.

However, polls on both sides of the Atlantic show a growing distrust of the other side. As a result of public opinion and different geopolitical goals, the US and the EU may already be in the midst of a long and slow break-up. Unfortunately, this is likely bad news for both sides, who have both benefitted from the unique relationship between the United States and Europe that has lasted since the Second World War.