Worldwide Covid-19 case numbers continued to soar, rising by nearly 600,000 per day over the past week and rising to more than 53 million recorded cases since the beginning of the outbreak in China. Meanwhile, the death toll from the pandemic surpassed 1.3 million.

Case numbers in the United States continued to rise, due in part to the combination of the arrival of the flu season (at least in some parts of the country) and the mass gatherings that occurred due to the recent elections there, and the unseasonably warm temperatures in the eastern US. 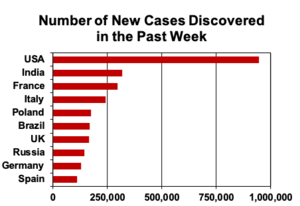 European countries also continued to record very high numbers of new cases of Covid-19 in recent days, while fatality numbers in Europe rose substantially during this period. However, the introduction of lockdowns in many parts of Europe appears to have helped to reduce the number of new cases of the virus in some countries.

As the temperatures in northern India continued to drop, that region’s leading cities are experiencing an increase in both air pollution and the number of new Covid-19 cases found there. Nowhere are these problems more acute than in the city of Delhi, where air pollution levels have soared to their highest levels in recent years and the number of new Covid-19 cases has risen dramatically over the past few weeks.

The First Vaccine: The US pharmaceutical giant Pfizer and the German biotechnology company BioNTech announced that their vaccine for Covid-19 had been successfully tested and that 50 million doses would be available by the end of 2020, and 1.3 billion by the end of 2021.

Economic Hopes: Many of the world’s leading economies were able to generate higher rates of growth than expected in the third quarter of 2020, resulting in their forecasted declines in economic output in 2020 being reduced. Still, many countries will suffer huge losses this year. 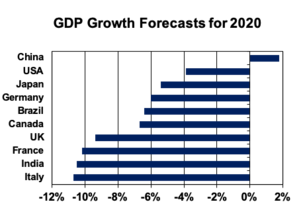 Governments are scrambling to introduce guidelines and restrictions for the coming holiday season in much of the world, particularly in the Northern Hemisphere, where the number of new Covid-19 cases being recorded has risen to dangerous levels.

A number of other pharmaceutical and research firms are expected to announce the results of tests on the effectiveness of their vaccines for Covid-19 in the coming weeks, potentially building more confidence in the wake of this week’s vaccine announcement.