Assessing the Performance of the Global Economy in the Third Quarter

As the world was caught almost completely unprepared for a health crisis on the scale of this year’s Covid-19 pandemic, it was no surprise that nearly all of the world’s leading economies suffered severe disruptions in the first half of 2020. The second quarter of the year was particularly troubling, with many economies suffering double-digit year-on-year declines in economic output during that period. Fortunately, most countries, and some industries, have managed to adapt to the changes wrought by the pandemic and this allowed economic output to rebound in the third quarter of 2020. In fact, the economic results for the third quarter were, for the most part, better than expected, with a number of major economies bouncing back strongly during that period.

There were many reasons for this relatively strong recovery in the third quarter. For one, the spread of the virus slowed in many key economies during that period, allowing for some lockdown and social distancing measures to be eased, at least until a new surge in the number of Covid-19 cases began in many parts of the world in the latter part of the third quarter. Furthermore, governments and businesses had time to prepare for maintaining a higher level of business activity amid the threat of the pandemic. Likewise, consumers were also able to re-orient their spending after the shocks of the first half of the year. For some sectors, such as most manufacturing sectors, this meant an almost complete return to normal operations, particularly as there was a great deal of pent-up demand in many key markets around the world.

For the world’s leading developed economies, the first half of 2020 was a period characterized by massive disruptions, particularly to those economies that are dependent upon service sectors to generate growth, or those that lack high-tech and high-growth industries. Fortunately, a number of leading developed economies managed to record better-than-expected quarter-on-quarter growth in the third quarter of this year, and while their output was still below pre-pandemic levels, their losses were not as great as had been feared. 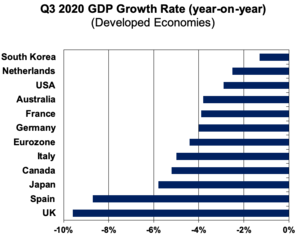 For example, the United States economy staged an impressive recovery in the third quarter, while some European economies bounced back stronger than anticipated. However, some important developed economies continued to suffer significant losses, such as the United Kingdom, Spain and Japan. Nevertheless, the third quarter was an indication that, if the pandemic can be brought under control more quickly than expected in 2021, developed economies could produce a more robust recovery from this crisis than would have been projected just a few months ago.

For emerging markets, the results of the third quarter were mixed, with some important emerging markets staging very strong recoveries, but with others still mired in a severe downturn. 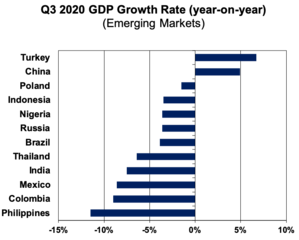 On the positive side, China’s economy continued its recovery with strong growth in the third quarter, particularly for manufactured exports. A handful of other emerging markets also recorded year-on-year growth in the third quarter, led by Turkey, which grew faster than any other large economy during that period (despite a looming currency crisis). Even some emerging markets that suffered major losses earlier in the year managed to bounce back in the third quarter, including Brazil and Poland. However, some emerging markets have yet to come anywhere close to recuperating many of the losses that they incurred earlier in the year, particularly those that suffered the largest disruptions due to the pandemic, such as India and most Latin American economies. Overall, some emerging markets have seen their relative position in the global economy improve as a result of the pandemic, while others have found their positions severely weakened.

While the economic results from the third quarter were mostly welcome, it has become clear that, for most economies, a V-shaped recovery is not likely. This is due to the fact that the spread of Covid-19 has accelerated in the fourth quarter of 2020, with some of the worst outbreaks occurring in a number of the world’s largest economies. While lockdown measures have been re-imposed in many countries, they are not as severe as those imposed earlier in the year, while businesses and consumers have learned how to better adapt to these measures. This suggests that, while a slowdown is inevitable for many major economies in late 2020 and early 2021, it will not be as severe as those recorded in the first half of 2020. Meanwhile, the remarkably quick development of effective vaccines for Covid-19 has raised hopes that much of the world can return to some form of normality, perhaps as early as mid-2021. If this is the case, the global economy should be in a position to gradually recover from some of the more pressing long-term effects of this economic downturn. For a battered global economy, this is indeed welcome news.