Today, the United States finds itself often comparing itself to China, as that country has become the most serious threat to the US’ position of global leadership. The European Union, in contrast, often compares itself to the United States, as European states and the EU have found themselves as junior members of a sometimes tense partnership known as the “West”. While the US and the EU have much in common in terms of economic and geopolitical positions, their goals and aspirations can often be quite different from one another. For the United States, maintaining the global leadership that it has held since the Second World War remains a key goal, while the European Union, with a few exceptions, has goals and aspirations that are far more regional in nature. Likewise, where the United States rewards individuality and risk-taking, the European Union is far more focused on stability and social protection.

The United States and the European Union: A Comparison

Economically, the United States and European Union, despite their different goals and aspirations, are not all the dissimilar. For example, the United States is the world’s largest economy, with a total GDP of $20.9 trillion, while the EU, if it were a single economy, would be the world’s second-largest economy with a GDP of $15.2 billion (although the EU has been passed by China this year). 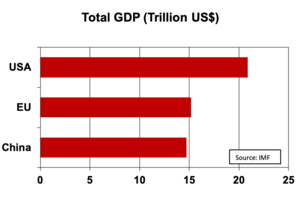 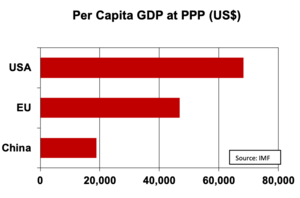 Likewise, both the US and the EU economies have suffered significant long-term economic slowdowns, although the US’ downturn has been nowhere near as severe as that in the EU over the past ten to fifteen years. 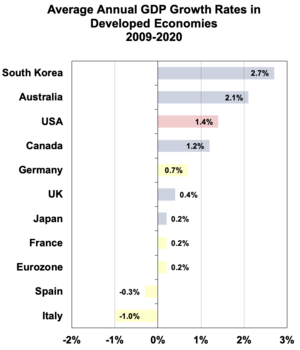 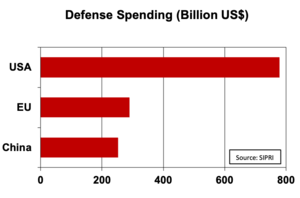 The United States is Pulling Away

The Covid-19 pandemic has exposed further differences between the United States and the European Union, particularly on the economic front. In the United States, the economy has come roaring back from the impact of the Covid-19 pandemic. Among developed economies, the 3.5% decline in economic output in the US last year was among the smallest of any large economy last year. 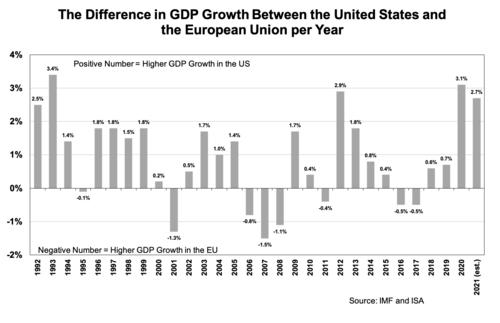 Furthermore, the US economy is forecast to grow by nearly 7% this year, allowing the US economy to fully recover from the pandemic quicker than nearly all other large economies. Over the longer-term, while the US is expected to record slower growth rates later in the 2020s, this growth will remain significantly higher than that of the European Union and most other developed economy.

This is due to a number of factors, One of these is the leading presence of US-based companies in so many high-tech and high-growth sectors of the economy. Another is the flexible nature of the US economy, which not only allows it to react to crises quicker than most other large economies, but also to reallocate resources away from slower-growing sectors of the economy to those that have a greater potential for growth. Finally, despite all of the political and social turmoil of the past few years, consumers, businesses and investors in the United States generally remain more optimistic than their peers in other parts of the world, something that has helped to fuel economic growth in the US for much of its history. 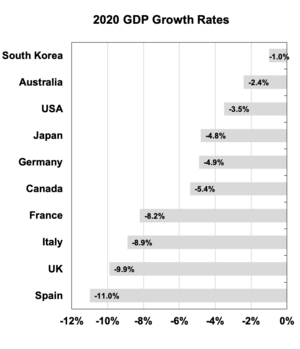 The European Union and the Threat of Long-Term Stagnation

For the European Union, the pace of its economic recovery from the Covid-19 pandemic has been frustratingly slow. Not only did the EU’s economy shrink by nearly twice as much as the US’ economy last year, its forecast growth rate of around 4% this year is far below that of the United States. For some economies in Europe, there is hope that a combination of export growth and an influx of stimulus funding will significantly boost economic growth prospects in the months ahead. However, for others, this latest crisis has reinforced the notion that it is becoming increasingly more difficult to generate economic growth in the European Union.

Since 2009, the European Union’s economy has expanded by a measly 0.5% per year, while the Eurozone’s economy has expanding by an even worse 0.2% per year. In comparison, the United States economy has expanded by 1.4% per year since 2009. What growth that has been generated in the European Union since the Global Financial Crisis has largely come from the poorer countries of Central Europe and a handful of smaller EU member states such as Ireland and Sweden. There are a number of reasons for this poor performance. For example, most EU member states lack a sizeable presence in many of the key high-tech and high-tech sectors of the economy that have been the catalyst for much of the economic growth in Asia and North America in recent years. Likewise, most EU economies lack the flexibility to quickly react to crises such as the Financial Crisis, the Euro Crisis and the Covid-19 pandemic. As a result, not only has the European Union struggled to generate growth in recent years, but its prospects for generating higher rates of economic growth in the future are quite dim.

What is Driving Them Apart?

There are a number of key differences between the United States and the European Union that help to explain their divergent economic performances in recent years. The US continues to have a very strong performance in many of the fastest-growing sectors of the global economy, whereas many of Europe’s largest economies continued to be dominated by slower-growing industrial and service sectors. At the same time, the fact that the world has been hit by so many economic crises in recent years gives an advantage to more flexible economies such as the United States. In contrast, too many EU member states have continued to focus on preserving stagnant or declining sectors of their economies, or on protecting jobs in the public sector at the expense of jobs and businesses in the private sector.

Another key difference between the United States and the European Union is that the EU is saddled with southern Europe, a region with a population of more than 130 million people that is severely lacking in terms of economic competitiveness. While the US also is home to regions that are less competitive than others, none of these have struggled as much as countries such as Italy or Greece in recent years.

One area where the US and the EU have a lot in common is the scale of the political divisions that have plagued them in recent years. In the US, the growing polarization between the political right and the political left has intensified dramatically, but this has not stood in the way of the US economy continuing to generate economic growth, as witnessed by the strong economic response to the Covid-19 pandemic by both the Trump and the Biden administrations. In contrast, the increasingly dysfunctional relationship between the European Union and its member states has proven to be a major hindrance to the ability of EU member states to react to economic crises such as those that have befallen Europe this century.

Despite their differences, the European Union remains one of the United States’ leading allies in its growing rivalry for global leadership with China. However, there are growing concerns in the US that not only will many EU member states choose to go their own way with regards to their relationship with China, but that the US is finding itself saddled with a partner whose economic and geopolitical clout is waning at a dangerous pace. This could be compared to Imperial Germany’s relationship with its leading ally in the First World War, the Habsburg Empire, a state that shares many of the same characteristics as today’s European Union. This helps to explain why the past four governments in the United States have actively been moving to shore up their ties with powers apart from the EU.

As we look ahead to the remainder of the 2020s, we can see that the gap in terms of economic and geopolitical power between the United States and the European Union is expected to widen further. Sure, there will be pockets of success and growth within individual EU member states (just as there was during the Habsburg Empire in the final decades), but these will be overshadowed by growing weaknesses in the EU. Already, there are major concerns about the lack of military power in the European Union, something that has severely damaged the EU’s ability to play a role in many global conflicts and flashpoints in recent years.

Now, with the European Union’s main source of power, its economic clout, threatened by long-term stagnation, the EU faces a very uncertain future. To measure the impact that long-term economic stagnation can have on a country’s global influence, one need only look at modern-day Japan, which has suffered from three decades of economic stagnation. For the United States, the long-term weakening of one of its leading global partners must also be a concern, as it jeopardizes the very notion of the West as a collective force for the advancement of economic development and security for the world at large.