After building up its military forces in the east of Ukraine, Russia launched its long-awaited offensive aimed at seizing control of the entire Donbas region. Initial reports indicated that Russian forces were attempting to advance along the entirety of the front line in the Donbas, using heavy artillery and armor to attempt to smash through the Ukrainian lines. So far, progress appears to be slow, but Ukrainian forces could find themselves stretched thinly along some areas of the front.

In the southeast, Russian forces have seized most of the port city of Mariupol. However, at least 900 Ukrainian troops and militia members continued to hold out in the Azovstal steel plant on the outskirts of the city and have thus far thwarted Russian efforts to seize that facility.

Heavy fighting has taken place outside of Ukraine’s second-largest city, Kharkiv, as well in recent days. Russian forces have attempted to make territorial gains in the area around that city. However, a Ukrainian counter-offensive to the southeast of Kharkiv appears to have gained some ground for the defenders.

In the wake of the sinking of the Moskva, the flagship of Russia’s Black Sea Fleet, by Ukrainian forces, Russia stepped up its missile and air attacks on targets deeper inside Ukraine. This included recent attacks on targets in Kyiv and Lviv, both of which caused a number of civilian casualties. 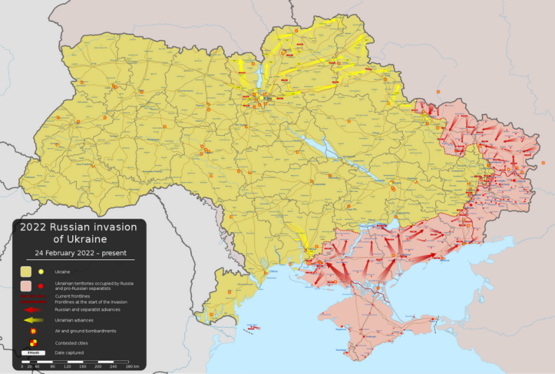 Russian Anger at the West: Russia has stepped up its condemnation of the United States and other Western countries who have been supplying Ukraine with arms and other military equipment. Russia warned of “unpredictable consequences” if the US and its allies continued to arm Ukraine.

Russia's Plan C: If Russian forces fail to make significant gains along the Donbas front in the coming days, Russia’s entire strategy in Ukraine will be turned on its head. This will force Moscow to consider other methods to achieve its military objectives in Ukraine.