The focus of Russia’s offensive in recent days remains on the eastern front, where Russia has concentrated much of its forces in Ukraine. Nevertheless, Russian forces have only been able to make relatively small territorial gains along the northern sector of the eastern front, while make absolutely no headway against the Ukrainians on the southern sector.

The last remaining Ukrainian defenders in the southern port city of Mariupol remain in control of much of the giant Azovstal steel factory along the coast in that city. According to civilians who recently escaped from that facility, living conditions there have severely deteriorated and the ability of the Ukrainian defenders to hold out against repeated Russian attacks is gradually being reduced, suggesting that this battle could soon come to an end.

While the eastern front remains the focal point of the conflict at present, Russia appears to be gearing up for a renewed offensive in the southwest of Ukraine. Here, significant gains were made by the Russians in the early stages of the conflict, but since then, the front has been relatively stable, with Ukrainian forces even retaking some areas to the northwest of the city of Kherson. Now, Russia may be preparing to launch a new offensive, one that is aimed at connecting the territory under its control in southern Ukraine with the breakaway Moldovan region of Transnistria. If successful, this would cut off the Ukrainian port city of Odesa from the rest of the country. 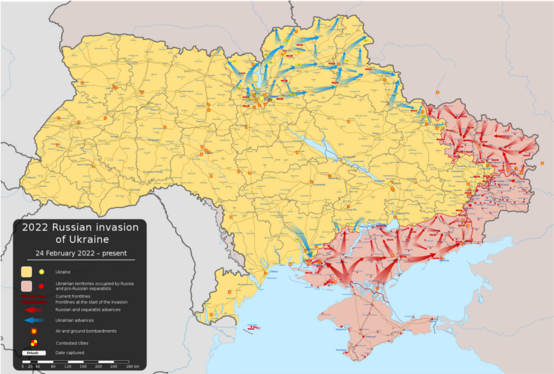 Russia Moves to Annex Parts of Ukraine: There are increasing signs that Russia is moving to annex parts of eastern and southern Ukraine. These include the use of the Russian ruble for payments in these areas and the establishment of local or regional governments that are fully under Moscow’s control.

EU Divisions: European Union member states remain divided over proposals to fully ban imports of Russian oil and gas into the EU. Hungary has already signaled its complete opposition to such a ban, while German officials remain concerned over the economic impact of a ban.