Most of the fighting in Ukraine remained concentrated along a relatively small section of the eastern front, where Russia has brought overwhelming forces to that area in a bid to overwhelm the Ukrainian defenders there. However, Russian progress remains slow, with Ukrainian forces offering dogged resistance to the invaders and extracting a heavy price from the Russians.

Meanwhile, large-scale street fighting is taking place in the strategic eastern city of Sverodonetsk. 80% of the city has now been taken by Russian forces, as the city has been attacked on three sides by the Russians. Seizing Sverodonetsk would given control of nearly all of Luhansk to the Russians.

According to Ukrainian President Volodymyr Zelensky, 20% of Ukrainian territory (125,000 sq km / 48,300 sq miles) is now under Russian control. However, the president claimed that more than 30,000 Russian troops have died in Ukraine, far more than the 1,300 deaths claimed by Moscow. 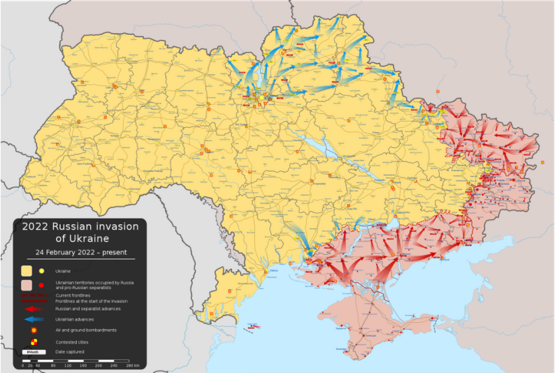 US Artillery System for Ukraine: As part of a new $700 million arms package, the United States will be sending its HIMARS advanced rocket system to Ukraine. This will give the Ukrainian armed forces the ability to strike Russian targets much further behind the front lines than they can at the moment.

What Are Russia’s Revised Aims?: With fighting concentrated in the eastern part of Ukraine, questions are being asked about whether or not Russia will bring an end to its offensive operations if and when it can secure full control of the Donbas region. This could give Moscow the chance to declare victory.