Vietnam has weathered the Covid-19 pandemic and the impact of global inflationary pressures better than any other large economy. In fact, Vietnam’s economic performance in recent years and decades has been nothing short of remarkable, with the country’s economy expanding by nearly 7% per year for the past thirty years. 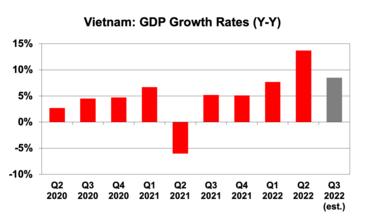 There are many reasons why the Vietnamese economy has emerged as one of the fastest-growing economies in the world. These include:

Look forward, Vietnam’s economic outlook is among the most positive of any emerging market in the world. In fact, Vietnam is forecast to record higher levels of economic growth than any other large economy in the world in the coming years. 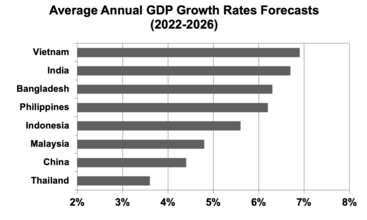 Furthermore, as the relationship between China and the West continues to deteriorate, Vietnam is in a strong position to attract some of the investment that used to flow into China. This puts Vietnam in a position to achieve a high very level of economic growth and to improve the living standards of its nearly 100 million people.