Europe's Mediterranean Crisis »
« Could the War in Ukraine Resume? 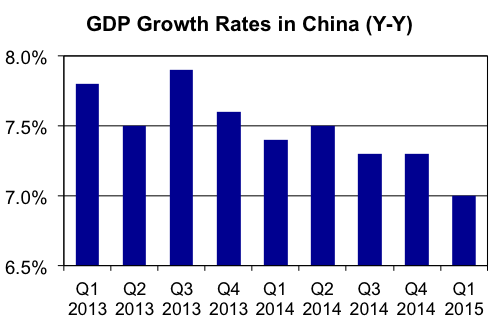 In the first quarter of this year, the Chinese economy grew at its slowest past since the first quarter of 2009, when the global financial crisis was at its height.  That this slowdown has continued despite the fact that the Chinese government has enacted a number of large-scale economic stimulus programs in recent months reveals that this slowdown is indeed gaining momentum.  Moreover, as nearly all sectors of the Chinese economy recorded lower rates of growth in recent months, this downturn is proving to be quite pervasive and this poses a particular challenge to China’s political and economic leadership.  As such, China may find itself forced to turn back, as least partially, to an economic model that is driven by exports rather than domestic consumption, but this will prove difficult in the current global economic environment.

China’s economy expanded by 7.0% on a year-on-year basis in the first quarter of 2015, down from the 7.3% growth recorded in the last three months of 2014.  This was the result of the fact that most sectors of the Chinese economy slowed in early 2015.  For example, industrial production unexpectedly fell in March and struggled throughout the quarter.  Likewise, fixed asset investment growth was also disappointing in the first quarter, signaling a loss of business and investor confidence in the Chinese economy.  Domestically, retail sales, while still recording double-digit growth, were below forecasts in the first quarter of this year.  Finally, export revenues were very disappointing in the first quarter (especially in March) as a result of sluggish export demand and China’s loss of export competitiveness that stems from higher wage bills and a strong yuan.

At the beginning of this year, we had been forecasting economic growth in China to fall to 7.1% in 2015, but this now appears to have been a little too optimistic.  First, the economic situation in China deteriorated over the course of the first quarter, even when the impact of the Lunar New Year is factored into the economic results.  Second, China’s export competitiveness is almost certain to continue to deteriorate over the course of this year, forcing China to continue along its path that moves it away from having an economy that is almost entirely driven by exports.  However, a weakening real estate sector and lower levels of consumer confidence are making this transition particularly difficult in 2015.  As a result, China is stuck between deteriorating export competitiveness on one side and uneven growth on its domestic market on the other side.

This slowdown poses a number of serious challenges for China’s political and economic leadership.  For years, China’s government has been enacting policies aimed at moving the country away from its dependence upon exports and investment for growth and towards an economy that is increasingly driven by the demand of Chinese consumers and businesses.  However, with domestic demand failing to live up to expectations amid a deterioration of China’s export competitiveness, the government might find itself forced to enact measures aimed at restoring China’s export growth.  This could be done most effectively by enacting policies that would weaken the yuan, which has been one of the world’s strongest currencies in recent months.  While this would help to partially restore China’s export competitiveness, it could fuel new inflationary pressures while leading to a serious global currency war.  As such, China’s leaders have a number of difficult decisions to make in the coming months that will determine how China will deal with its economic slowdown and to prevent a hard landing for the Chinese economy.